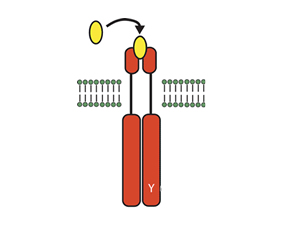 Intracellular signaling mechanisms relay cell signals from membrane bound receptors to the nucleus, where transcription of DNA initiates an effector response.  In inflammatory cells, the effector response helps to drive the initiation and propagation of inflammatory diseases, such as rheumatoid arthritis (RA).  Thus, inhibiting key intracellular signals may be a treatment for RA.  Here, Weinblatt et al (Arthritis Rheum 2008; 58(11):3309) report results of the efficacy and safety of an inhibitor of one such intracellular signaling mediator, spleen tyrosine kinase (Syk).

Adults with active RA for at least one year with inadequate responses to methotrexate were randomized to receive oral R788 (a Syk kinase inhibitor) at a dose of 50, 100, or 150 mg twice daily vs. placebo in addition to stable background methotrexate.  Other stable concomitant background non-biologic DMARDs (hydroxychloroquine, sulfasalazine, doxycycline, and minocycline) and prednisone (< 10 mg per day) were allowed in addition to methotrexate; however, other biologics, leflunomide, and cyclosporine required discontinuation and wash-out prior to enrollment.  Efficacy was assessed at 12 weeks; safety was assessed regularly out to 14 weeks.  All subjects and personnel were blinded to treatment allocation.  The study was conducted at rheumatology centers in the U.S. and Mexico.

A total of 189 patients were randomized (142 received R788 in one of 3 doses; 47 received placebo).  A total of 158 patients (84%) completed the study, with more patients in the placebo group withdrawing (77%) compared to the active treatment groups (86%).  Patients tended to be female (87%) with a mean age of 53 years.  The mean RA duration was 17 years.  The mean background dose of methotrexate was 15 mg.  Other allowed DMARDs were taken by 35% of subjects, balanced between treatment and placebo groups.  Mean baseline DAS28 was 4.2 and mean baseline HAQ was 1.6, with no significant difference between the groups.

Responses were greater in the higher dose R788 groups (see table, above) with significant differences noted by the first week, paralleling decreases in IL-6 and MMP-3 levels over the same time period.  Response rates were higher in patients enrolled in Mexico than those in the U.S.; however, relative differences from placebo did not differ by country.

For safety, the occurrence of GI symptoms (diarrhea, nausea, and gastritis) and neutropenia (<1500/mm3) increased with increasing dose of R788.  Neutropenia was observed in 15% of the R788 treated patients and 30% of those treated with the 150 mg BID dose.  Neutrophils increased in all patients with dose adjustment.  No opportunistic infections were observed.

Treatment with the Syk kinase inhibitor R788 was associated with rapid improvement in articular signs and symptoms in RA patients with active disease who had failed prior DMARDs.  Short-term follow-up suggests safety signals for GI symptoms and neutropenia.

The response rates presented here are quite striking, all the more so given the rapidity of the response.  Oral administration is another advantage of this agent.  However, longer term studies are needed to determine whether this agent will be a viable alternative for RA therapy, particularly given the early signals for GI and hematologic effects.  Signaling through tyrosine kinases are not only used to upregulate inflammation, but are involved in a variety of important homeostatic processes.  Owing to this, thorough characterization of long-term safety profiles is absolutely necessary before this class of therapy can be widely applied.  However, if safety is confirmed, intracellular signaling could prove to be a powerful new class of immunomodulatory drug across the rheumatic diseases.