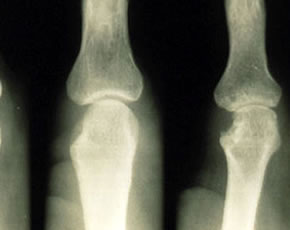 Antibodies against citrullinated proteins have emerged as powerful diagnostic and prognostic tools in RA that may contribute to the initiation phases of the disease.  The enzymes that catalyze the citrullination process, known as peptidyl argenine deiminases (or PADs), may also be involved in the initiation and propagation steps of the RA disease process.  Additionally, autoimmunity to these catalysts may identify a subset of RA patients with unique disease phenotypes.  Here, Harris et al (Arthritis Rheum 2008;58:1958) investigate the associations of antibodies against PAD4 with the genotypic and phenotypic features of RA.

Antibodies against PAD4 were detected in 16 out of 38 RA patients (42%), but in none of 32 healthy controls and in only 1 of 126 patients (0.8%) with other rheumatic diseases (scleroderma, myositis, lupus, and primary Sjogren’s)—yielding a sensitivity of 42% and specificity of 99% for RA.  Clinical characteristics of PAD4 antibody positive patients were similar to those of negative patients with the exception of disease duration, which was significantly higher in PAD4 antibody positive patients.

All PAD4 antibody positive RA sera recognized full length PAD4 (designated as type I sera) while only 48% of sera recognized a truncated form of the PAD4 protein.  Further investigation demonstrated that PAD4 lacking the first 119 amino acids of the N terminus was not recognized by either Type I or Type II sera, indicating the necessity of these amino acids for antibody recognition.  Additional studies demonstrated that Type I sera also required the 141 C terminal amino acids in addition to the N terminal amino acids in order to recognize PAD4.  The crystal structure of PAD4 includes head-to-tail contact between the N and C terminus of PAD4.  Polymorphisms in the PADI4 gene encoding PAD4 did not alter recognition of PAD4 by PAD4 antibody positive sera.

Association of anti-PAD4 antibodies with susceptibility haplotype of PADI4

Previous studies have established 3 SNP polymorphisms within the PADI4 gene associated with an increased susceptibility for RA that also happen to encode amino acids in the N-terminal region recognized by PAD4 antibodies.  Heterozygosity for one of these PADI4 susceptibility haplotypes was associated with a significantly higher odds of having PAD4 antibodies (OR 2.59 (95%CI 1.02-6.08)).

Anti-PAD4 antibodies were highly specific for RA and all recognized a portion of the PAD4 enzyme protein containing regions encoded by variants in the PADI4 gene known to increase the risk of RA.  Presence of anti-PAD4 antibodies was associated with longer disease duration and more severe radiographic damage.

This report introduces a novel RA factor that may link the process of citrullination to the initiation and propagation steps of the RA disease process.  The association of PAD4 antibodies with longer standing disease suggests that these antibodies may occur after the initiating steps of disease and may represent a later risk factor for radiographic damage.  The exact mechanism and dynamics leading to damage by anti-PAD4 antibodies are unclear.  However, if implicated directly in radiographic damage, then suppression of their development (perhaps with early aggressive therapy) might be a way to limit accumulated radiographic damage over time.