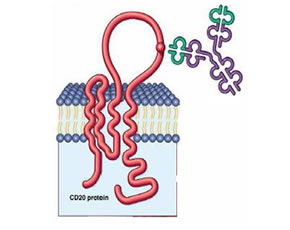 Anti-B cell therapy with rituximab has been shown to be safe and beneficial for RA treatment.  Rituximab is approved and marketed for the treatment of RA in patients who have failed other therapies.   Ocrelizumab, a fully human monoclonal antibody against CD20, may have less immunogenicity and less complement activation than rituximab which, theoretically, may reduce the development of drug neutralizing antibodies and infusion reactions.  Here, Genovese at al report the results of a Phase I/II dose finding study of Ocrelizumab in RA patients who have failed other DMARDs (including prior TNF inhibitors).

The methods and clinical outcomes data for the double-blind portion of this trial were previously reported on this site as part of highlights from the 2006 American College of Rheumatology Annual Scientific Meeting.  Safety data is presented out to 72 weeks.

237 patients (196 ocrelizumab, 41 PLC) were enrolled with mean SJC/TJC, 22/32; RA duration 11 yrs; prior TNF antagonist 47%. 85% of ocrelizumab pts and 76% of PLC pts completed 24 weeks. B cell depletion was observed with all doses of ocrelizumab and was largely sustained over 72 weeks in the higher ocrelizumab dose groups.

Ocrelizumab was relatively safe and efficacious for the treatment of treatment refractory RA.

This study incorporates a large sample size for an early phase trial and is very supportive of a favorable efficacy and safety profile for ocrelizumab.  However, more study is needed to firmly establish efficacy and long-term safety, explore the durability of response, and assess the risk associated with repeat infusions.  Not requiring pre-infusion glucocorticoids is an advantage of this agent; however, the rate of mild to moderate infusion reactions remains substantial based on these data.  A head-to-head trial with rituximab would be the best to establish comparability, even if, at the least, a non-inferiority design was utilized.