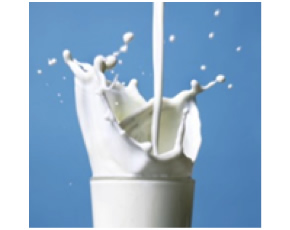 Ingestion of dairy products has been associated with a lower risk of gout in observational studies. However, the mechanism underlying this protective effect is unstudied. In addition, the association could be related more to health behaviors associated with milk drinking, such as better general health and less consumption of alcohol and red meat, rather than milk itself. To address these issues, Dalbeth et al (Ann Rheum Dis 2010; 69:1677) report the results of a randomized controlled trial of milk consumption on serum urate levels.

Healthy male volunteers with normal renal function and no history of gout were randomly assigned to consume one of the following: soy milk (control group); early season skim milk; late season skim milk; or ultrafiltered MPC 85 skim milk. Late season skim milk was selected as it contains high levels of orotic acid, proposed to be a uricosuric, while ultrafiltered milk has low levels. The products were equal with respect to protein content (80g). Blood and urine was sampled before consumption and at 60, 120, and 180 minutes post-consumption. Each study subject returned for 4 total study visits in which each remaining milk product, randomly allocated, was consumed.

A total of 16 men were studied. Median age and body mass index was 34 years and 24.6 kg/m2, respectively. Baseline serum urate, purine metabolites, and urine fractional excretion of urea were balanced between the groups. Among the milk products, soy contained the highest concentration of purines and the lowest concentration of xanthine oxidase (the enzyme that catalyzes the conversion of insoluble urate to more soluble products). Uric acid was lowest, and orotic acid highest, in late season skim milk.

Intact milk has a uricosuric effect that may mediate the observation of a protective effect of diary consumption of the development of gout.

This is an interesting study that helps to define the mechanism linking diet with hyperuricemia and gout. In dietary counseling of patients, care providers may tend to focus on foods known to increase gout symptoms, such as shellfish, red meat, and alcohol. However, it may be also helpful for patients to know about the potential for protective foods. This particular study does not prove that increasing milk consumption reduces serum uric acid or prevents gout flares in people with prevalent gout; however, given that increasing milk consumption is not harmful and may have beneficial effects beyond a potential uricosuric effect, then there is likely little harm in recommending this strategy in the absence of a study specific to gout patients. In addition, all of the patients in this study had normal renal function. In general, the effect of uricosurics is blunted in patients with renal dysfunction, raising the possibility that increasing milk consumption may have little to no effect in individuals with kidney disease, which, unfortunately, is the majority of patients with gout.