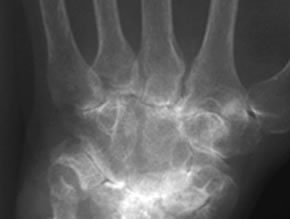 Initial combination therapy has been shown to be superior to step-up combination therapy in groups of RA patients; however, these findings are difficult to reconcile with the observation that many RA patients will have complete remission of disease on methotrexate alone.  Practice patterns tend to emphasize initial treatment with methotrexate monotherapy, followed by the addition of other agents in combination for those with inadequate responses.  However, which agents (biologics vs. non-biologics) to add has not been studied head to head in an untreated population demonstrating inadequate response to methotrexate.  Here, van Vollenhoven at al. (Lancet 2009; 374: 459) report the findings of the Swefot (short for Swedish Pharmacotherapy) Trial, exploring the efficacy of adding the TNF inhibitor infliximab to methotrexate vs. adding sulfasalazine + hydroxychloroquine in RA patients who have not rapidly responded to methotrexate monotherapy.

DMARD naïve RA patients with at least moderate disease activity (DAS28 > 3.2) and symptoms of one year or less were initiated on methotrexate monotherapy at 20 mg/week for 3 – 4 months.  Patients not achieving a low disease activity state (DAS28 < 3.2) were then randomized to receive infliximab 3 mg/kg infused using the standard regimen or sulfasalazine (1000 mg twice a day) + hydroxychloroquine (400 mg per day).  Efficacy endpoints (EULAR good response, ACR20/50/70) were followed at 12 and 24 months after initial enrollment.  Some treatment adjustments to the protocol were allowed for medication intolerance (i.e. disease could be lowered or discontinued, cyclosporine could be substituted for sulfasalazine + hydroxychloroquine, etanercept could be substituted for infliximab, etc…).  Treatment allocation was unblinded.

A total of 487 patients were enrolled and treated with methotrexate.  Of these, 145 (30%) achieved a low disease activity state on methotrexate monotherapy within 3 -4 months.  A total of 27 patients dropped out due to intolerance of methotrexate (6%), and 57 patients for other reasons.  This left 130 patients who were randomly assigned to add sulfasalazine+hydroxychloroquine and 128 to infliximab.  The average age of the randomized group was 52 years.  Most (77%) were female with an average duration of symptoms of 6 months.  The average DAS28 score at baseline (pre-methotrexate) was 5.95, while the average DAS28 at randomization was 4.85.  Characteristics were balanced according to treatment group.

Carefully designed treatment strategy studies have an advantage over efficacy studies of single agents against placebo in providing practical treatment data that can often seamlessly be applied to the clinic setting.  This treatment strategy trial is important for two reasons.  1) it confirms the clinical benefit of trying aggressively dosed methotrexate monotherapy in nearly all early RA patients for a defined period with treatment to low disease activity as the goal and 2) it suggests that a TNF inhibitor should be chosen over combination non-biologic DMARD therapy in patients who fail initial methotrexate combination therapy.  The study does not, however, address whether initial combination therapy is superior to methotrexate monotherapy nor were the patients blinded to treatment allocation.  Both of these issues will potentially be addressed in the TEAR (Treatment of Early Rheumatoid Arthritis) trial, the results of which have not yet been reported.