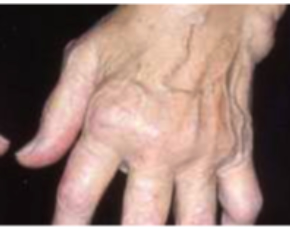 Spleen tyrosine kinase (Syk) is an important mediator of inflammatory signals from extracellular receptors to the nucleus of immune cells.  Inhibiting Syk with the oral, small-molecule inhibitor fostamatinib has shown efficacy compared to placebo in a short term study of RA patients on background methotrexate.  Here, Weinblatt et al (NEJM 2010; published online ahead of print on September 22, 2010) report six month efficacy and safety data of fostamatinib for the treatment of RA.

RA patients with active disease were randomized to receive treatment with fostmatanib 100 mg twice daily, 150 mg daily, or placebo.  Patients were required to be on stable background methotrexate, but could also be on other stable background sulfasalazine, anti-malarials, NSAIDS, or low dose prednisone.  Prior TNF inhibitor and leflunomide use was permitted, but required washout prior to enrollment.  The primary efficacy outcome was ACR20 response at 6 months.  Safety outcomes were monitored throughout the study.

A total of 457 patients were enrolled; 304 to either of the fostamatanib doses (equally apportioned) and 153 to placebo.  Characteristics of the patients were typical for RA clinical trials.  The average age was around 50 years, most (85%) were female, with an RA duration of around 9 years and an average DAS28 score at enrollment of 6.15 units.  The average number of swollen joints was 12.  Because many of the enrollment sites were in Central and South America, the prevalence of Hispanic ethnicity was nearly 50%.  Baseline characteristics were balanced between the treatment groups.  Dropouts were 21% of the placebo group compared to 16% of the active treatment groups.

Clinical responses are described in the table (below).  Patients receiving the highest dose of study drug had higher responses than those receiving the lower dose or placebo.  Differences in response compared to placebo were observed as early as the first week of the study.

For the open label extension, all patients received active drug and were followed for an additional 6 months (n=297).  Of these, 69 (18%) withdrew—19 for inefficacy and 21 for adverse events (nausea, diarrhea, elevated liver function tests).  There were 3 deaths in the open label extension phase (septicemia, cerebral hemorrhage, and sudden death) and 24 additional serious adverse events (among which were a B-cell lymphoma, cervical carcinoma, and a myocardial infarction).

The oral Syk inhibitor fostamatanib was superior to placebo in reducing the signs and symptoms of active RA, with higher doses demonstrating more robust efficacy.  Some adverse events, such as diarrhea and hypertension, were higher among treated patients.

Kinase inhibitors represent an exciting new area of pharmacotherapeutics in RA.  For fostamatinib, oral administration, the magnitude of efficacy, and quick onset of action are compelling aspects.  Side effects, such as nausea, diarrhea, and hypertension are issue to follow in further studies, and it is yet unclear whether these will emerge as nuisance side-effects that can be managed, or whether they will limit the wide application of the drug.  Additional study is required to determine long-term safety of the drug, particularly in terms of serious side-effects, such as cardiovascular events, infection, and malignancy.