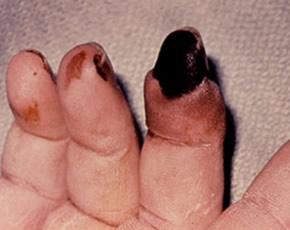 Trends in prevalence of rheumatoid vasculitis over the period 1985-2006 (for inpatients) and 1997-2006 (for outpatients) among 10 million hospitalizations and outpatient visits from an annual census of more than 37,000 male veterans included within the administrative database of the Veterans Health Administration.  The diagnosis of rheumatoid vasculitis was based on codes for arteritis, mononeuritis multiplex, peripheral neuropathy due to connective tissue disease, gangrene, and chronic ulcers, in rheumatoid arthritis patients who did not have diabetes.  Inpatient and outpatient visits were considered separately.

There has been a temporal decrease in the prevalence of rheumatoid vasculitis among inpatient and outpatient veterans over the past decades, with a dramatic decrease in prevalence between the years 2000 and 2001.

The strengths of this study are the large number of patients involved and data collection that goes back more than two decades.  It is interesting that an abrupt drop-off in the prevalence of rheumatoid vasculitis was observed around the year 2000.  While it is tempting to attribute this to the beginning of the era of biologic therapy in RA patients, the study presented here does not present the fine detail required to prove this inference.  Since the diagnosis of rheumatoid vasculitis was based on administrative coding and not more objective evidence (such as biopsy), then there is potential for misclassification of the outcome.  For example, the diagnosis of hepatitis C related arthritis (which can present with joint pain and an elevated rheumatoid factor, frequently misdiagnosed as rheumatoid arthritis) and its complication of cryoglobulinemic vasculitis has changed over time.  If these patients were included in the rheumatoid vasculitis group in the past, but now accurately classified, then this could account for some of the decline in rates of rheumatoid vasculitis observed in this study.  Regardless, it is encouraging that the current prevalence of rheumatoid vasculitis remains quite low, considering how devastating this complication can be for affected individuals.