What on Earth is a Monoclonal Antibody?

In the old days when a scientist wanted to generate an antibody against a given molecule (the antigen), the strategy was to immunize your animal of choice (rabbit, goat, sheep or horse) with a highly purified preparation of the molecule. The immunization was done repeatedly at 2-3 week intervals to get the levels of antibody as high as possible. In most cases, the molecule used for immunization needed to be rigorously purified since one needed to minimize the possibly of generating an antibody against a minor contaminant. After repeated immunizations, the animals were bled and the sera tested for reactivity against the injected antigen. The immunization was considered a success if one could dilute the serum multiple times and still retain reactivity toward the antigen. Antisera made in this fashion were invaluable tools in basic and clinical biomedical science and these reagents found their way into treatments and routine diagnostic tests.

The immunization of animals to generate polyclonal antiserum had several shortcomings.

(top of section)
(top of page)

Kohler and Millstein drew upon the field of somatic cell genetics to devise hybridoma technology.(ref 1) In this approach, as outlined below,a myeloma cell rendered drug sensitive through a mutation in a growth essential gene (HGPRT) is chemically fused with immune cells from a host animal immunized with the antigen of interest and the resulting “hybrid” cells are grown in medium containing the selective drug. Since the immune cells normally have a short life span in tissue culture and the myeloma cells are drug sensitive, the only cells that will survive are those “hybrid” myeloma cells that obtained a normal HGPRT gene from the immune cells. Such cells also have a high likelihood of also carrying the immune cells antibody genes resulting in the generation of a “hybridoma” that can grow continuously in vitro and secrete a single monoclonal antibody. By using an appropriate screening strategy one can identify clones of cells secreting a single antibody of interest for subsequent expansion. 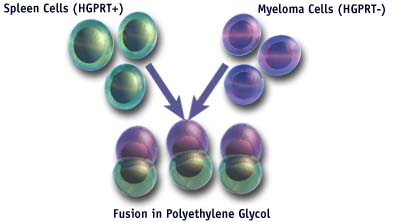 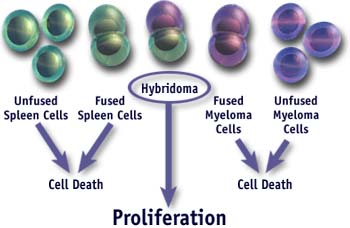 6. Once isolated, the cells can be grown in bulk cultures using new tissue culture technologies (hollow fiber chamber, etc), and large (milligram to gram) quantities of monoclonal antibody can be purified to homogeneity.

The development of monoclonal antibody technology offers a number of advantages over the original art of polyclonal antibodies.

Since Kohler and Millstein provided us with this approach some 20 years ago, monoclonal antibodies have impacted on virtually every area of investigative science and applied research. Perhaps the best example of the application of monoclonal antibodies is their use in defining cell surface structures such as CD molecules and HLA molecules on the surface of bone marrow derived cells that give rise to and make up our protective immune system. Monoclonal antibodies that define CD molecules and flow cytometry have been used to identify the normal components of the immune system and to determine if these component are under-represented (in the case of immunodeficiency diseases) or over produced (in some cancers).(ref 2) It is well known that a subset of lymphocytes termed T helper cells is important for normal immune function. Monoclonal antibodies reactive with the CD4 molecule expressed on T helper cells were used to demonstrate that a decrease in CD4 cells is a feature of AIDS and the levels can be used to stage the disease. Thus, monoclonal antibodies have proven critical not only in prompting anunderstanding of the complexity of the immune system but also in the understanding, diagnosis and management of disease.

Monoclonal antibodies have also been extensively used in the design of sensitive detection assays such as ELISAs. These tests have been used to detect normal and autoantibody levels, determine the presence and levels of autoantigens, viral/bacterial and other environmental antigens as well as assess the levels of normal components in bodily fluid.(ref 3)

Another area in which monoclonals have had an impact is the isolation and purification of molecules. A given monoclonal antibody can be coupled to an insoluble surface and used to affinity purify the molecule of interest. In fact, this approach allows one to accomplish a several-fold purification in a single step.(ref 4)

Monoclonal antibodies against bioactive cytokines have been used in therapy for many immunologically based disease processes such as the control of transplantation rejection and the modulation of autoimmune diseases.(ref 5) In RA, there are several antigens that have been targeted for inhibition by monoclonal antibodies. A monoclonal antibody called infliximab (Remicadeä ) has shown significant promise in the treatment of rheumatoid arthritis (RA). (see RA treatments) There is also an active interest in modifying monoclonal antibodies by attaching a toxin. These antibody immunotoxins can be used to search out and destroy a specific cell type such as tumor cells expressing a specific tumor marker that the antibody recognizes. This approach has been used to target and destroy CD4+ cells for the treatment of RA.(ref 6) 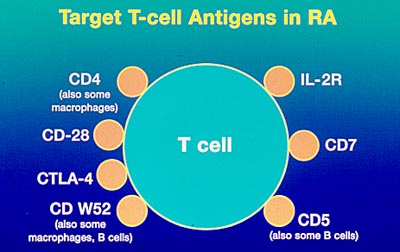 With an isolated monoclonal antibody one can easily clone the immunoglobulin genes that encode it and genetically tailor the monoclonal antibody for a particular use. Because many monoclonal antibodies are generated in rodent species, the immune system can recognize the rodent antibody as foreign and mount a potent response against it. As a result, of this issue there is considerable interest to “humanize” these antibodies by replacing the rodent immunoglobulin structures with human counterparts, perhaps allowing the reagent to be ignored by a human immune system. The anti-TNF antibody, infliximab, for example, has very little mouse protein, although antibodies are still generated against it. 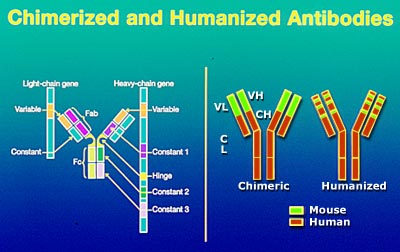 Use in Applied Chemistry

Monoclonal antibodies have also been used in applied chemistry.(ref 7) It was appreciated that enzymes function in part by having a high affinity interaction with a short-lived transition state. It was reasoned that, if enzymes can interact with these transitional states, maybe an antibody can as well andpotentially serve as an enzyme providing catalytic function. By generating antibody reagents against enzyme inhibitors that mimic the transitional state, one can isolate antibodies that can provide catalytic function. The catalytic reactions range from redox reactions to structural rearrangements. This initial success, together with the principles emerging in the field of combinatorial chemistry indicates that recognition molecules generated by the immune system have tremendous potential to be used as chemical tools.

In summary, it is safe to say that in 20 years monoclonal antibodies have had a tremendous impact on the basic and clinical biomedical sciences. Their availability has allowed investigators to ask new questions and to develop new insights and applications that will ultimately benefit human health and the human condition.