The typical case of rheumatoid arthritis begins insidiously, with the slow development of signs and symptoms over weeks to months. Often the patient first notices stiffness in one or more joints, usually accompanied by pain on movement and by tenderness in the joint. The number of joints involved is highly variable, but almost always the process is eventually polyarticular, involving five or more joints.  Occasionally, patients experience an explosive polyarticular onset occurring over 24 to 48 hours.  Another pattern is a palindromic presentation, in which patients describe swelling in one or two joints that may last a few days to weeks then completely go away, later to return in the same or other joints, with a pattern increasing over time.

Nonspecific systemic symptoms primarily fatigue, malaise, and depression, may commonly precede other symptoms of the disease by weeks to months and be indicators of ongoing disease activity. Fatigue can be an especially troubling feature of the disease for many patients.  The pattern of symptoms may wax and wane over the course of a day and even from one day to the next.  Sometimes “flares” of RA are experienced as an increase in these systemic symptoms more than discrete joint swelling or tenderness.   Fever occasionally occurs and is almost always low grade (37° to 38°C; 99° to 100°F). A higher fever suggests another illness, and infectious causes must be considered, especially in patients who are taking biological therapies and immunosuppressive medications.

Morning stiffness, persisting more than one hour but often lasting several hours, may be a feature of any inflammatory arthritis but is especially characteristic of rheumatoid arthritis. Its duration is a useful gauge of the inflammatory activity of the disease. Similar stiffness can occur after long periods of sitting or inactivity (gel phenomenon). In contrast, patients with degenerative arthritis complain of stiffness lasting but a few minutes.

Symmetrical joint swelling is characteristic of rheumatoid arthritis that has been persistent for a period of time.  However when only a few joints are affected at the beginning of disease, symmetry may not be seen and should not preclude the diagnosis of RA.  Careful palpation of the joints can help to distinguish the swelling of joint inflammation from the bony enlargement seen in osteoarthritis, with the swelling often described as being doughy or spongy in RA in contrast to firm knobby enlargement in osteoarthritis. Swelling of the PIP and MCP joints of the hands is a common early finding (Pictured below). Wrists, elbows, knees, ankles and MTP are other joints commonly affected where swelling is easily detected. Pain on passive motion is a sensitive test for joint inflammation as is squeezing across the MCPs and MTPs. Occasionally inflamed joints will feel warm to the touch. Inflammation, structural deformity, or both may limit the range of motion of the joint. Over time, some patients with RA develop deformities in the hands or feet. RA spares the distal joints of the fingers (DIPs) and the spine with the exception of the cervical spine (especially the atlanto-axial joint at C1-C2), which may become involved especially with longer standing disease.

Permanent deformity is an unwanted result of the inflammatory process. Persistent tenosynovitis and synovitis leads to the formation of synovial cysts and to displaced or ruptured tendons. Extensor tendon rupture at the dorsum of the hand is a common and disabling problem.

Advanced changes in RA (shown below) include ulnar deviation of the fingers at the MCP joints, hyperextension or hyperflexion of the MCP and PIP joints, flexion contractures of the elbows, and subluxation of the carpal bones and toes (cocked -up).

Rheumatoid Nodules. The subcutaneous nodule is the most characteristic extra-articular lesion of the disease.   Nodules occur in 20 to 30% of cases, almost exclusively in seropositive patients.  They are located most commonly on the extensor surfaces of the arms and elbows (shown below)but are also prone to develop at pressure points on the feet and knees. Rarely, nodules may arise in visceral organs, such as the lungs, the heart, or the sclera of the eye. (learn more about rheumatoid nodules in case report #6)

Cardiopulmonary Disease.   There are several pulmonary manifestations of rheumatoid arthritis, including pleurisy with or without effusion, intrapulmonary nodules, and diffuse interstitial fibrosis. On pulmonary function testing, there commonly is a restrictive ventilatory defect with reduced lung volumes and a decreased diffusing capacity for carbon monoxide.  Although mostly asymptomatic, of greatest concern is distinguishing these             manifestations from infection and tumor. (learn more about pulmonary complications in rheumatoid arthritis in case report #6)

Atherosclerosis is the most common cardiovascular manifestation in rheumatoid arthritis. It is also the leading cause of death in the RA patient. Because chronic inflammation may be the cause of atherosclerosis, it is possible that early aggressive treatment of RA may reduce the incidence or severity of heart disease. Pericarditis also seen with RA.

Eye Disease.  Keratoconjunctivitis of Sjogren’s syndrome is the most common ocular manifestation of   rheumatoid arthritis. Sicca (dry eyes) is a common complaint. Episcleritis occurs occasionally and is manifested by mild pain and intense redness of the affected eye. Scleritis and corneal ulcerations are rare but more serious problems.

Sjogren’s Syndrome. Approximately 10 to 15% of patients with rheumatoid arthritis develop Sjogren’s syndrome, a chronic inflammatory disorder characterized by lymphocytic infiltration of lacrimal and salivary glands. Sjogren’s syndrome is an autoimmune condition that affects exocrine gland function, leading to a reduction in tear production (keratoconjunctivitis sicca), oral dryness (xerostomia) with decreased saliva of poor quality, and reduced vaginal secretions.  It is important for patients to be seen regularly by the ophthalmologist and dentist.  Additional medications are sometimes required to treat this condition.  A polyclonal lymphoproliferative reaction characterized by lymphadenopathy is also seen, and patients have an increased risk of developing lymphoma. Additional information on Sjogren’s syndrome can be found at our Sjogren’s Center website.

Rheumatoid Vasculitis. The most common clinical manifestations of vasculitis are small digital infarcts along the nailbeds. (see picture below) The abrupt onset of an ischemic mononeuropathy (mononeuritis multiplex) or progressive scleritis is typical of rheumatoid vasculitis. The syndrome ordinarily emerges after years of seropositive, persistently active rheumatoid arthritis; however, vasculitis may occur when joints are inactive. Addional information on vasculitis can be found on our Vasculitis Center website.

Felty’s syndrome is less commonly encountered than in the past.  This is characterized by splenomegaly, and leukopenia – predominantly granulocytopenia. Recurrent bacterial infections and chronic refractory leg ulcers are the major complications.

The course of rheumatoid arthritis cannot be predicted in a given patient. Several patterns of activity have been described:

Disability is higher among patients with rheumatoid arthritis with 60% being unable to work 10 years after the onset of their disease. Recent studies have demonstrated an increased mortality in rheumatoid patients. Median life expectancy was shortened an average of 7 years for men and 3 years for women compared to control populations. In more than 5000 patients with rheumatoid arthritis from four centers, the mortality rate was two times greater than in the control population. Patients at higher risk for shortened survival are those with systemic extra-articular involvement, low functional capacity, low socioeconomic status, low education, and prednisone use. With the advent of therapies to better control inflammation and treatment strategies geared to low disease activity and remission, it is hoped that the statistics concerning disability and mortality will improve.

No laboratory test will definitively confirm a diagnosis of rheumatoid arthritis. However, the information from the following tests contributes to diagnosis and management.

Chemistry tests are usually normal in rheumatoid arthritis with the exception of a slight decrease in albumin and increase in total protein reflecting the chronic inflammatory process. Renal and liver function are important to check before beginning treatment and are followed over time with many medications.

A positive rheumatoid factor is present in 70-80% of patients with RA. A positive Anti-CCP is a more specific marker for RA and is found in similar proportions of patients over the course of disease.  High levels of Anti-CCP also appear to be linked to a greater severity of the disease.

Measures of inflammation are often, but not always increased in RA. The erythrocyte sedimentation rate (ESR) is usually elevated in patients with RA and in some patients is a helpful adjunct in following the activity of the disease. The C-reactive protein (CRP) is another measure of inflammation that is frequently elevated, and improves with control of disease activity.

Erosions of bone and destruction of cartilage, occur rapidly and may be seen within the first 2 years of the disease, but continue to develop over time (See picture below). These anatomic changes result in limitations in range of motion, flexion contractures, and subluxation (incomplete dislocation) of articulating bones. Typical deformities include ulnar deviation of the fingers at the MCP joints, hyperextension or hyperflexion of the MCP and PIP joints (swan neck and boutonniere deformities), flexion contractures of the elbows, and subluxation of the carpal bones and toes (hammer toes and cock up deformities). Radiological findings early in the disease may show nothing other than soft tissue swelling. Thereafter, periarticular osteopenia may develop. With progression of their disease, narrowing of the joint space is caused by loss of cartilage, and juxta-articular erosions appear, generally at the point of attachment of the synovium. In end-stage disease, large cystic erosions of bone may be seen.

More recently the introduction of ultrasound and MRI imaging has imporved the sensitivity of detecting joint damage earlier in disease.  Ultrasound may detect synovitis, effusions, and erosions, in addition to power Doppler providing estimates of ongoing inflammation.  MRI may show inflammatory synovitis that enhances with Gadolinium and shows early erosions.  The role for these modalities in following patients over time in clinical practice is still not well established, but these methods may improve the ability to detect early disease and confirm a diagnosis.

Next: Pathophysiology of Rheumatoid Arthritis 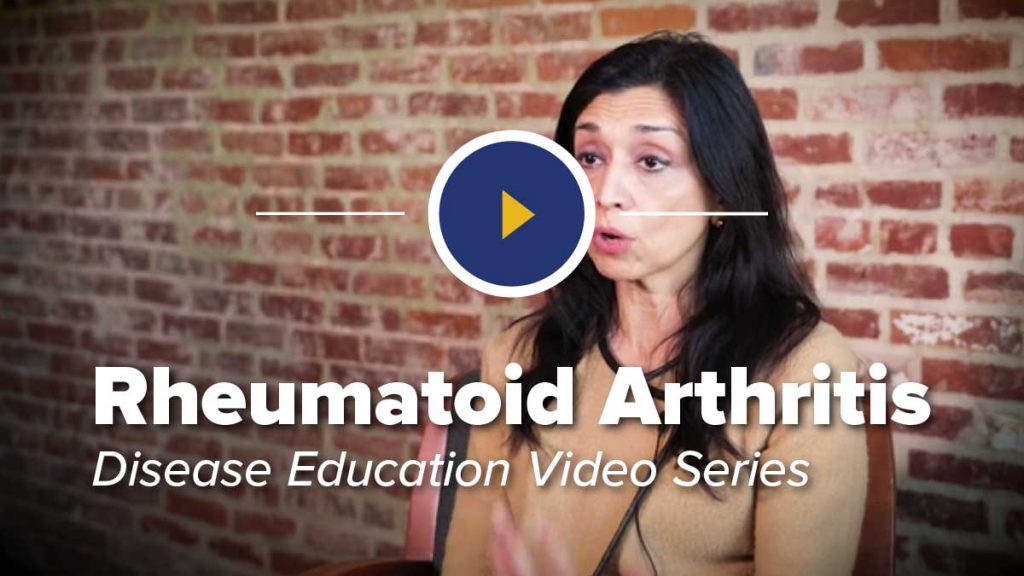