Treatment of pain and inflammation can be achieved with NSAIDs, colchicine, or corticosteroids (systemic or intra-articular). The choice of which treatment is the right one for a particular patient should be made on the basis of the patient’s co-morbid medical conditions, other medications, and side effect profile.

Uric acid is the end product of purine (nucleic acid component of DNA) metabolism and is produced normally by the body during tissue remodeling and breakdown. About 20% of uric acid is derived from purines ingested in food. Causes of hyperuricemia can be divided into two major categories: decreased clearance of uric acid from the kidney and increased synthesis of uric acid.

All patients should be encouraged to modify their lifestyle including limiting alcohol intake, encouraging weight loss where appropriate and decreasing food rich in purines. Co-morbid medical conditions should also be controlled including hypertension, diabetes and hyperlipidemia.

It is important to note that whenever starting a uric acid lowering treatment, there is a risk of precipitating a gout flare. A plan should be in place for management if this occurs. This generally can be avoided with the co-administration of prophylactic medications (steroids, colchicine, NSAIDs) along with the uric acid lowering therapy.

Allopurinol is a well tolerated, inexpensive, and commonly used uric acid lowering agent. Allopurinol can be started at doses as low as 100 mg daily (100 mg qod if creatinine clearance < 10 cc/min) and titrated by 100 mg every 10-14 days to achieve a serum uric acid level of 4-5 mg/dl.  Liver tests, blood counts, and renal function and should be monitored while on therapy. Toxicites include rash, hepatoxicity, bone marrow suppression and severe hypersensitivity reactions. Medication interactions can occur with allopurinol, warfarin, and theophylline and levels should be monitored. Allopurinol should be avoided in patients on azathiprine, 6-mercaptopurine and cyclophosphamide because of risk for bone marrow toxicity.

In 2009, the FDA approved the use of a new xanthine oxidase inhibitor, febuxostat, for the treatment of hyperuricemia in gout. It has demonstrated a dose-dependent decreasee in serum uric acid (daily doses 80mg or 120mg). Its efficacy has been demonstrated in patients with mild or moderate renal impairment and gout. However, it can cause abnormalities in liver function tests and routine monitoring of bloodwork is recommended. Similar to allopurinol, there are interactions of febuxostat with azathioprine, 6MP, and theophylline.

Uricase is an enzyme that converts poorly soluable urate (uric acid) to the more soluable allantoin (excreted in the urine). Uricase is present in most mammals, and these mammals with uricase do not develop gout. However, humans and some primates lack uricase (because of evoluationary gene inactivation) and lack the ability to make uric acid more soluable and hence, have gout. Pegloticase is a porcine uricase which was approved by the FDA in September 2010 for the treatment of gout in patients who have failed conventional therapy.

Pegloticase is administered  by intravenous infusion every 2 weeks. Patients should be treated prophylactically for allergic reations to the infusion with steroids and anti-histamines and monitored closely for the development of an infusion reaction. Caution should be used in prescribing this treatment in patients with a known cardiac history.

Eating a healthy balanced diet of low-fat proteins, low-fat dairy and vegetables will help maintain a healthy weight which is beneficial for the prevention of gout attacks as well. 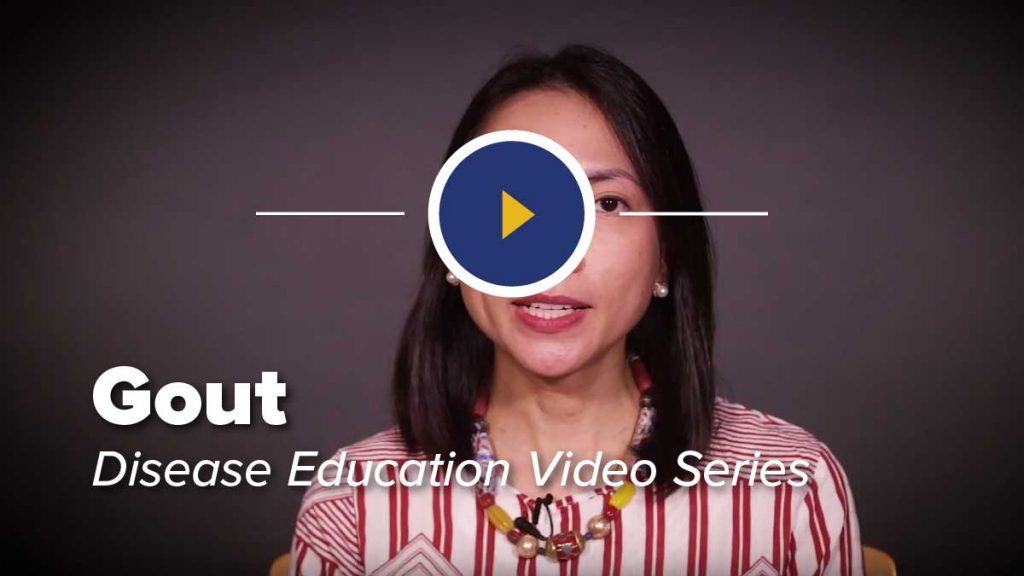 From symptoms to diagnosis, risk factors to disease monitoring, lifestyle tips to long term impact, we’ve produced six videos to provide patients with the tools needed to make informed treatment decisions and independently weigh risks and benefits of their choices.