It is estimated that collective spending by arthritis patients experimenting with unproven treatments, including diets, exceeds well over one million dollars annually. In 1989, Arthritis Care(ref 1) noted that greater than 50% of the Arthritis Care members who were surveyed, had invested in “unorthodox medicines, substances, or treatments (including diets), during the prior six months”.

Since the 1930’s researchers have been exploring the link between diet and arthritis. Once clear association between arthritis and nutrition has been demonstrated by the discoveries surrounding celiac disease. In this autoimmune condition, gluten is undoubtedly a trigger for the immune system and leads to robust inflammation in the gastrointestinal tract, skin and joints. However, investigation into gluten or other nutrients as triggers for other types of arthritis, such as osteoarthritis and rheumatoid arthritis has been more challenging.

Until we have access to more conclusive data regarding the benefits of dietary manipulation and RA, patients are encouraged to follow a healthy, balanced diet that fosters a healthy weight. It is important to avoid elimination diets and fad nutritional practices and to be cautious of claims of miracle cures.

The fourth edition of Nutrition and Your Health: Dietary Guidelines for Americans(ref 2) outlines some basic dietary advice for all healthy Americans ages 2 years and above about food choices that promote health and prevent disease. The main messages are as follows:

We always encourage our patients to eat “real food.” This means avoiding processed foods which often contain high levels of preservatives, extra sugar and saturated fats. The more that you are in control of what you are eating, the better the overall benefits for your health and arthritis.

Patients with RA are considered to be at nutritional risk for many reasons. One cause of poor nutritional status in this patient population is thought to be the result of the weight loss and cachexia linked to cytokine production.(ref 3) In patients experiencing chronic inflammation the production of cytokines, such as interleukin-1 and tumor necrosis factor, increases resting metabolic rate and protein breakdown.

The effects of arthritis medications that are frequently taken long-term may also compound these nutritional problems. One example of this is observed in patients receiving methotrexate, where patients are frequently identified with folic acid deficiency. Additionally, prolonged dosing of other RA medications may be associated with conditions such as gastritis or peptic ulcer, frequently reducing a persons desire to eat.

The most commonly observed vitamin and mineral deficiencies in patients with RA, are folic acid, vitamin C, vitamin D, vitamin B6, vitamin B12, vitamin E, folic acid, calcium, magnesium, zinc and selenium.(ref 4) Although, food is always the preferred source for vitamins and minerals, it may be essential to use supplementation to assist in counterbalancing the outlined deficiencies and improving nutritional status for patients with RA. Increased intake of antioxidants such as selenium and vitamin E may decrease free-radical damage to joint linings, which diminish swelling and pain. However, to date, there have been no human clinical trials that convincingly prove or disprove the efficacy of antioxidant use. Supplementation of calcium and vitamin D is also recommended to decrease the risk of osteoporosis that results from nutritional loss of these supplements, from menopause and from concurrent steroid therapy.

Food Hypersensitivities and Their Link to RA

In some patients, specific foods have been shown to exacerbate the symptoms of RA.(ref 5) Avoiding these foods or food groups has been shown to have limited, short term benefits but no benefits long term. Even though different forms of dietary modification have reportedly improved symptoms in some patients, people with RA may have spontaneous temporary remissions. Therefore, it is important to perform double-blind, placebo controlled trials to differentiate diet effect from spontaneous remission. You may identify a food that is a particular trigger for you, and this phenomenon is real. However, the science is not able to reliably identify specific triggers for individuals.

Diet elimination therapy is a method of determining food hypersensitivities with patients. Elimination diets avoid a specific food or group of foods such as milk, meat or processed foods that are known to be prime allergy suspects. These foods are eliminated from the diet for a specific period of time. Foods are then gradually reintroduced one at a time, to determine whether any of them causes a reaction.

Panush and colleagues, demonstrated temporary improvement in the signs and symptoms of RA with diet elimination and modification in a controlled study where the symptoms associated with food sensitivities were studied.(ref 5) During this study when the patient was fasting or on a severely restricted diet, the patients symptoms improved significantly. However, when the patient had milk reintroduced into the diet, episodes of pain, swollen and tender joints and stiffness were experienced. Similarly, Kjeldsen-Kragh and colleagues(ref 6) noted that fasting may be effective in reducing the symptoms of rheumatoid arthritis, however most patients relapsed as new foods were reintroduced into the diet. Pain and discomfort frequently returned once a patient reverted to a normal diet. These studies are few in number and should be interpreted and extrapolated to real life only with careful thought and caution.

Is Fasting Effective for Treating symptoms of RA?

Fasting is a very high risk, short term treatment and is currently not an accepted modality for the treatment of RA. Only a limited number of studies have shown fasting to transiently reduce joint pain in RA, and there have been no studies that have shown persistence of the improvement for greater than ten days. A general improvement in arthritic pain and swelling has been observed on day four or five of the fast, and pain and swelling generally remains absent for the duration of the fast. However, patients do not observe long term benefits from fasting and symptoms return within one week of resuming a normal diet.

Are There Benefits of Fish Oils on Arthritic Pain?

In recent years, researchers have become increasingly interested in the benefits of dietary fatty acids and their ability to modulate the inflammatory process. Dietary fatty acids such as Omega-3 fatty acids found in oils of fish and sea animals are of particular interest. Unfortunately, there have been few experiments with fish oils in patients with RA that have shown favorable results and consequently practical and safe doses are still unknown for this dietary therapy.(ref 4) In most of the studies using fish oils, benefits are not usually observed until at least twelve weeks of continuous use and appear to increase with extended treatment time. It is important to note that fish oil supplements may interfere with blood clotting and increase the risk for stroke especially when consumed in conjunction with aspirin or other nonsteroidal anti-inflammatory drugs. Taking fish oils has also been linked to changes in bowel habits such as diarrhea and may also cause an upset stomach. Until more is known about safe dosing for Omega-3 fatty acids, supplementation in the form of gelatin capsules is not advised in this patient population. Rather increased consumption of fish rich in Omega 3 fatty acids such as salmon, herring and mackerel may be safer. Whether omega 3-fatty acids should be included as standard therapy for RA remains controversial.

In conclusion, there continues to be a great deal of discussion as to whether foods ameliorate or perpetuate arthritis, or have any effect at all. We know that in some instances, available data have been interpreted to show that there may be an association between foods and joint pain for patients with rheumatoid arthritis. Patients are encouraged to discuss diet therapy with their health care provider, follow the recommendations of the US Dietary Guidelines for Healthy Americans and add a multiple vitamin-mineral supplement that contains 100% of the Recommended Daily Intake to their diet (top of page) 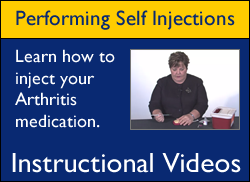