Ankylosing spondylitis (AS) is a chronic inflammatory disease causing axial arthritis, frequently resulting in inflammatory low back pain early in the disease course, with eventual severe impairment of spinal mobility due to structural changes ultimately leading to spinal fusion.  AS is the archetype of a heterogeneous group of arthritides within the rheumatic diseases known formerly as the seronegative spondyloarthropathies but now frequently referred to as spondyloarthritis (SpA).  In addition to axial arthritis, AS can result in peripheral arthritis, enthesitis, and uveitis, all shared characteristics of the SpA.

Recent population estimates indicate that the prevalence of AS in the United States is approximately 0.2-0.5%.  Based on data from multiple countries, the age- and sex-adjusted incidence of AS is 0.4-14 per 100,000 person-years.  Prevalence of AS in the population increases to approximately 5% among patients who are HLA-B27 positive.  AS occurs more frequently in men than women (2:1).  Age of disease onset usually peaks in the second and third decades of life.  Approximately 80% of patients with AS experience symptoms at ≤ 30 years of age, while only 5% will present with symptoms at ≥ 45 years of age.

The precise etiology of AS remains mostly unknown, though heritability is frequently cited as a significant contributor. Major histocompatibility alleles, particularly HLA-B27, may account for up to one-third of the genetic effect.  Other MHC alleles that may play a minor role in AS heritability include HLA-B60 and HLA-DR1. Recent genome wide association studies (GWAS) of patients with AS have identified susceptibility loci, including IL23R, ERAP1, and IL1R2 among others.

Most patients with AS will experience symptoms of inflammatory back pain due to sacroiliitis and axial arthritis of the spine.  This will frequently be accompanied by peripheral arthritis, enthesitis, and/or acute anterior uveitis.  Cardiac involvement resulting in aortitis and arrhythmias occur less commonly.

Spinal inflammation results in symptoms of back stiffness, soreness, and pain.  Symptoms tend to worsen in the early morning hours, causing sleep disturbance in many patients.  Inflammatory back pain will tend to improve with stretching and physical activity and worsen with prolonged inactivity.

The natural history of AS for some patients includes structural abnormalities of the spine from development of new bone formation.  These syndesmophytes frequently bridge adjacent vertebrae, resulting in impaired spinal mobility.  This process tends to be slow, but when it progresses can ultimately lead to complete spinal fusion or ankylosis (i.e. the so-called “bamboo spine”).  For many patients, ankylosis classically begins at the sacroiliac joints and progresses in an ascending manner, from the lumbar spine to eventually the cervical spine.  Based on more recent data, the pattern of spinal fusion may actually occur in a saltatory manner rather than strictly in continuously ascending fashion.

There is no consensus on the diagnosis of AS, but the 1984 Modified New York classification criteria has been generally accepted for both research and clinical purposes.  It requires at least 1 clinical manifestation and at least 1 radiographic parameter. Clinical manifestations include ≥ 3 months of inflammatory back pain that improves with exercise and exacerbated by rest, limitation of lumbar motion in both frontal and sagittal planes, and limitation of chest expansion compared to the normative population. Radiographic parameters include ≥ grade 2 sacroiliitis bilaterally or grade 3 or 4 sacroiliitis unilaterally.

Because many patients with early AS may not have radiographic evidence of sacroiliitis, the Assessment of Spondyloarthritis International Society (ASAS) has generated classification criteria for axial SpA.  These recent criteria may aid clinicians in the diagnosis of axial SpA well before patients fulfill AS criteria by the 1984 Modified New York criteria.

The ASAS criteria for axial SpA mandates patients have back pain for ≥ 3 months and be < 45 years of age while fulfilling 1 of the following 2 sets of criteria:

Depending on whether symptoms include axial arthritis, peripheral arthritis, or enthesitis, effective treatment modalities will vary.  All patients with AS should undergo physical therapy to improve spinal mobility and physical functioning.  Non-steroidal anti-inflammatory drugs (NSAIDs) are nearly always used in conjunction with physical therapy to alleviate symptoms of inflammatory back pain.  Any NSAID will usually be effective, when used at near maximum recommended doses; however, indomethacin has been considered the NSAID of choice based mostly on anecdotal evidence.  If NSAIDs fail to improve symptoms of sacro-iliitis, intra-articular corticosteroid injections of the sacroiliiac joints may be considered.  The introduction of TNF inhibitors, including etanercept, infliximab, adalimumab, and golimumab, have contributed further to alleviating the symptoms of axial arthritis.  Based on data from clinical trials, patients with active AS reported not only reduced inflammatory back pain but improved physical functioning, fatigue, and quality of life.  As is true for all treatment modalities for AS, TNF inhibitors have not been demonstrated to slow the disease progression of patients with AS destined to incur spinal fusion.

For symptoms of peripheral arthritis, the disease-modifying antirheumatic drugs (DMARDs) including sulfasalazine and methotrexate are frequently effective and well-tolerated.  Leflunomide has not demonstrated to be that effective in AS, unlike rheumatoid arthritis and psoriatic arthritis.

The prognosis for many patients with AS will be complete spinal ankylosis, while others will experience intermittent flares between bouts of clinical remission.  The long-term goal in the treatment of AS is to preserve as much physical functioning, decrease work absenteeism, and maintain a high quality of life. 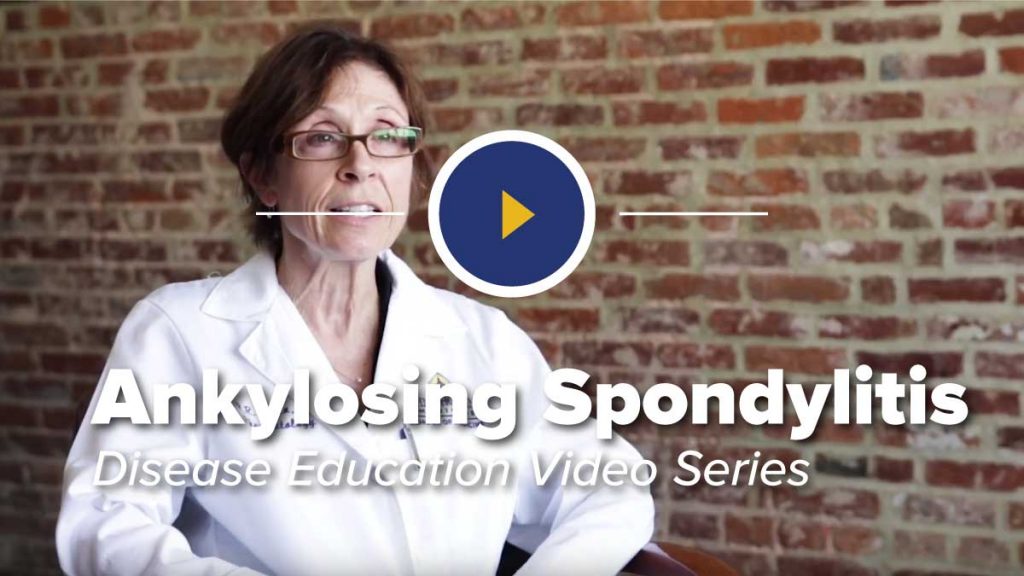 This series of five videos were designed to help you learn more about Ankylosing Spondylitis (AS).  You will learn how the diagnosis of AS is made, what happens to your joints, what treatments are available, what is happening in the immune system and what other conditions are associated with AS.